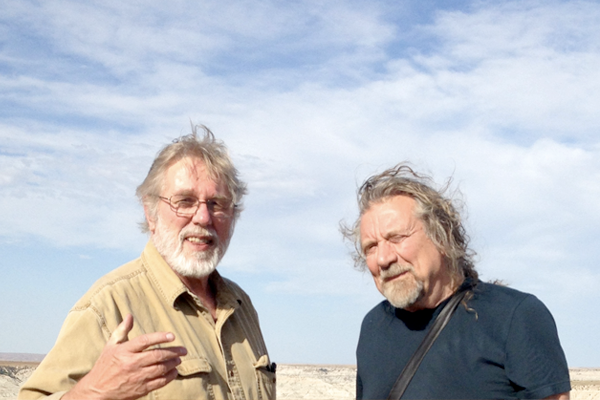 Folks often express frustration that I don’t publicize my appearances and readings more. It’s just not in my nature or temperament to do much promotion. It’s simply not a part of the literary life that appeals to me, so I let it fall to the side. But whenever I get out among my readers I absolutely love it and feel so fortunate to have created works that touch people. So I owe it to you who have been good to me to step out and face you a little more, at least to the extent of telling you about upcoming events and interesting encounters.

I had a chance to catch up with Robert Plant on his U.S. tour and to have lunch with him before his concert in Minneapolis. Due to his kindness I was able to get my stepson, Creighton Penn, my son in law, John Douglass Macrae, my sister, Anne Dorgan, and Chris Sweeney, the man who plays me in the film of Neither Wolf nor Dog, the opportunity to see his concert and meet him after the show. He’s such a good person.

I also had the opportunity to speak to some fascinating groups, ranging from anthropology students at Normandale Community College to the annual gathering of tribal colleges in Bismarck, North Dakota, to a series of libraries across southern Minnesota and the Lower Sioux Dakota tribe in Morton, Minnesota. All of these were wonderful encounters. They allowed me (perhaps “forced me” would be a better term) to get out of my head and back into the world. I forget how rewarding and how much fun it is to get on the road and hit the small towns and blue highways and the unfailingly interesting and intelligent people who live along the way.

I also have been trying to make my way through the tangled landscape of self publishing to make sure my favorite literary quiet child, Native Echoes (previously known as A Haunting Reverence) gets heard. It is a slow slog, but we move forward. Look for it on Amazon or at your local bookstore or through my sisters’ website, Wolfnordog.com.

Perhaps most exciting, my new book, Dancing with the Gods: Reflections on Life and Art is about to be released by Canongate, the U.K. publisher. It will be available through all the usual outlets here in the U.S. starting in early June.

Two events of significance are shaping up. First, I am going down to Malibu to sit in conversation with the legendary producer, Rick Rubin, for a documentary that is being produced about his work and life. Apparently he loved Dancing with the Gods and wants us to share thoughts about the ideas it contains.

Then — and finally we get to an event available to you all — I will be facilitating a workshop/retreat in La Veta, Colorado, at the end of July. It is going to be small and intimate.  I will post more specifics shortly.

So, there you are. Too many words, but at least now you know.