The Silent Voices need to Speak: The Wolf at Twilight and the Invisible Shame of the Indian Boarding Schools 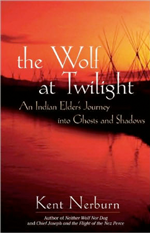 In the last several years there has been a real growth in racial awareness in America. The depth of the injustices and continuing quiet prejudices toward the Black and Asian communities are being revealed in ways much of us in White America have previously not fully recognized.

This is good, and long overdue. But, as usual, the Native American community is, for the most part, being left out of the equation.

America simply cannot face the fact that there is no appropriate redress of grievances for the truth that America stole the land on which our country has been built. There is nothing we can do to change that fact, and, being a people who believe in progress and optimism, we are constitutionally incapable of absorbing a tragedy of our historical making that cannot be made right. So we ignore it, claim that it is in the past, tell Native people that they must get over it, and otherwise marginalize it until it is as close as possible to invisible in our consciousness.

But lately, the discovery of the bodies of 215 children on the property of a British Columbia residential school has made a tiny blip on our radar. It was only after several years of working in Native America that I came to realize the dark truth of the boarding school/residential school experience all across our continent. There are children’s bodies everywhere.

Though the numbers are hard to pin down, there were at least 357 Indian boarding schools where more than 100,000 children had their lives shaped and, very often, their spirits broken and, in too many cases, their lives ended. It is easy to descend into a litany of the crimes committed and cruelties inflicted by these institutions, and it is true that in many cases the intentions of the institutions were good. But on the level of real experience, the desire of the father of the boarding school system, Richard Henry Pratt, to “kill the Indian to save the man,” too often resulted in killing the man (or woman) as well, at least spiritually if not physically.

The reason I am making this long post is that when I discovered the depth and reality of this experience and its impact on Native people, I resolved to write about it in a way that would bring it alive to readers. I did not want a litany of cruelties and injustices, I wanted to tell a story, in much the same way as Elie Wiesel told the story of the Holocaust in “Night.” And so I wrote, “The Wolf at Twilight:  An Indian Elder’s Journey through a Land of Ghosts and Shadows.” the story of Dan’s search for his little sister who got lost in the Indian boarding school system.

As you probably know, I do not do well at self promotion. It feels cheap and venal. But, as too many people have told me, if the goal of my books is to teach truths and tell stories that need to be heard, promoting them is not self-promotion, it is education.

And so I am asking you, my readers, to spread the word about The Wolf at Twilight. Blog, share, do whatever strange cyber things one does in this new world of social media to get this book known. The voices of the dead children and the wounded hearts and spirits deserve to be heard. The Wolf at Twilight was the best I could do to help those voices speak.

21 thoughts on “The Silent Voices need to Speak: The Wolf at Twilight and the Invisible Shame of the Indian Boarding Schools”