The Boarding School Tragedy — What Do We Do Now? 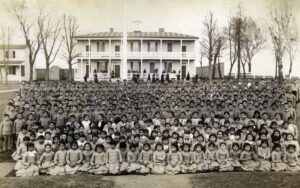 I am writing this on my blog post, www.kentnerburn.com, with a feed to facebook. So if you are reading it on facebook, go to the blog page where we can gather and make comments as well as on facebook.

With your help, we have made amazing progress in raising awareness of the boarding school horrors. With luck we will get to Deb Haaland — good and influential people are assisting in the effort to get her a copy of The Wolf at Twilight. She doesn’t need it; her knowledge is deep, personal, and profound But that book can open the eyes and, with luck, the hearts, of people who previously have neither known nor cared about the tragedy of the boarding schools and the lingering effects on people and families today.

So now comes the next step — the step I don’t know how to make. What do we do to move the issue forward? More specifically, what do you Native readers want to see happen? This is where we non-Natives move back and become allies. Our job is to listen and help, and to use our White privilege and status to amplify your voices and turn the concern to action.

One of you readers — sadly, I can’t find the comment to give you credit — said, “When Native people raise an issue, it is a complaint. When White people raise that issue, it becomes a cause.” This needs to become a cause. But it needs to have a desired outcome. Awareness is great, and, if that’s all the comes of this, it is enough. But a specific purpose — a legislative goal or some specific action — focuses energy and becomes the tip of the spear. That’s what we should be seeking.

What would you Native readers like to see happen to help the healing? I can speak, I can write, but I can’t organize my way out of a paper bag. We need a common purpose to come out of this moment and this engagement of good people, and that means the Native voice must be heard and must articulate a specific goal.

What would you like to see happen around the issue of the boarding schools? For the grandparents, for the children, for the children yet unborn? For awareness but also for healing? We are all listening and ready to help.

20 thoughts on “The Boarding School Tragedy — What Do We Do Now?”