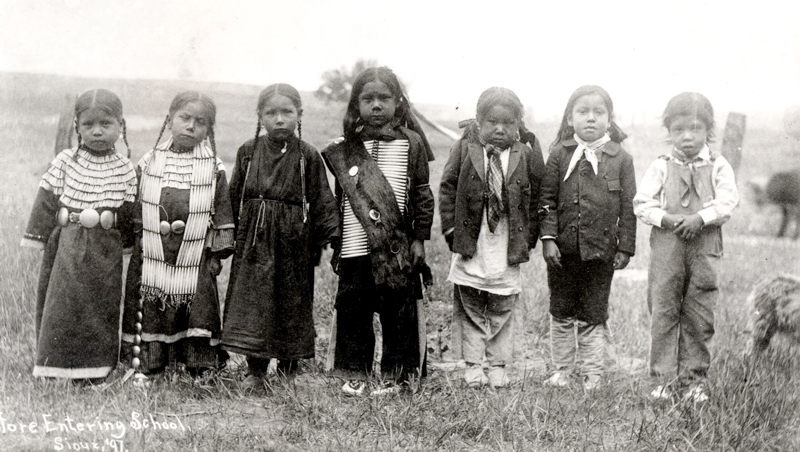 Bodies of children buried in unmarked graves?  Native America has known this for years.

Just wait. Coming soon to a neighborhood near you.  Right here in the good ol’ US of A.  350 schools.  Maybe 100,000 children over the years.  Not all dead, but all taken from their families.  All shorn of their hair, their culture, their families and their way of life.  All dedicated to boarding school founder, Richard Henry Pratt’s, vision to “Kill the Indian.  Save the man.”  Oops.  Sometimes they got it wrong.  Killed the man, too.  And the woman.  Or, they would have grown up to be men and women.  But they never got there.   Little kids.  Kids who got sick.  Kids who died alone.  Little babies, the result of rapes by staff, burned in stoves.  (Oh no, that couldn’t have happened.  We’re a civilized and caring nation).  Buried in unmarked graves.  Solve the problem.  Destroy the evidence.

Listen.  The whispers are getting louder.  The bones are beginning to rattle.  They’re here.  They’re under your feet.  They’re under your consciousness.  Little children.  Like your son, your daughter, your little brother and sister.  That’s what you need to do:  no ragamuffins in torn dresses and little military uniforms.  Look at your children.  Look at your little brother, your little sister.  Look past their blond hair and blue eyes, past their little league games, past their play dates.  Look at them scared, taken away from your home, their dolls and teddy bears.  Look at them crying when they are pulled from your arms.  Look at them taken to a place where they can’t contact you, beaten if they spoke their own language, made to eat strange food, never hugged or held, crying themselves to sleep at night.  Look at them dying.  And look at them being thrown in an unmarked grave.

It’s time to listen.  Time to hear.  Time to care. Time to apologize.

Do you want to know more?  Do you dare stare it in the face?

Boarding School Seasons by Brenda Child.  My book, The Wolf at Twilight.  The Canadian documentary, Unrepentant , Steven Heape’s film, Our Spirits Don’t Speak English, Wellbriety’s Journey to Forgiveness.  And there is more.  So much more.

Secretary of the Interior, Deb Haaland, has spoken up.  Her family lived the boarding school experience.  She knows.  She speaks the truth.  Things get only a microsecond of time in the American consciousness.  She has brought the story forward.  It is up to all of us to see that it doesn’t get buried again along with the forgotten children.  The bones are whispering.