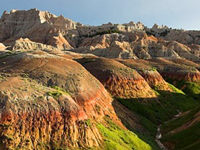 Today was the day we went to shoot at Wounded Knee.

There Is something at Wounded Knee, and about Pine Ridge in general, that defies explanation. I have heard it is at Gettysburg as well, though I’ve never been there. It has to do with the presence of history so strong that it becomes a spiritual force. Is it the presence of unquiet spirits? Is it the simple presence of death and the abrupt loss of the force of life on such a large scale in a single place? All I know is that it has to do with feelings seeking a place to rest, and finding none.

Dave Bald Eagle, who plays Dan, led us in prayer. This was his place, and in its presence he came alive and we became children at his side. His Lakota words seemed more right than anything any of us could say, as if they reached across and spoke to the forces on the other side.

We all placed tobacco on the mass grave. Richard Ray Whitman (Grover), whose Ponca heritage gave him access that none of us had, lit sage and passed it around. We all pulled it to us and over us, then walked to the grave site and placed tobacco as an offering. Dave led us in all things. We then shook his hand quietly, with gratitude for opening this place to us by his blood right to be there, and stood in silence as the wind blew the prayer ties and the clouds moved silently across the horizon.

The shoot – the real shoot – had begun.

Shortly thereafter I had to return to Minnesota for some speaking engagements.  Sadly, I will not be going back to the location.  But before I left I could see that the actors were coming together in a magical way.  I don’t know what Steven is seeing through the lens, but I know that what he is shaping in front of the lens is deeply human and engaging.   It is, as I’ve said, “covered with rez dust.”

There will be a few surprises for those of you who have read the books — surprises I will not reveal. But they are not damaging changes.  In fact, they just increase the authenticity, and that is what we want.  We want viewers to say not that this is absolutely faithful to the book, but that it is absolutely faithful to Indian country.  My purpose as an author, and Steven’s as a director, is to bring Indian country alive for all those who have never been there, and to do it with such authenticity that the Native people who see the film say, “Yes, this is how it is.  Thank you.”

I think that is what is happening.  But, from here on out it is a mystery and a surprise to me as much as to you.

Another surprise that will reveal itself in due time is an episode of the PBS show, Religion and Ethics, that just completed shooting here in Minneapolis.  The crew came in and filmed me in conversation with their interviewer and did some other filming to augment and expand the basic interview.  I have no idea what they will create from the footage they shot.  But I know they interviewed some people for whom I have the deepest respect, did some filming while I was speaking at Joan of Arc church, and took some footage of the great Indian painter, Sam English’s work, and are hoping to use some of John Willis’ photos from Views from the Reservation, a book that any of you who are interested in Pine Ridge and the Lakota should find and cherish.  How they stir that all into a single pot, I don’t know.  My only instruction to them was to make me look young and thin.  There is a reason why God invented CGI.

Ever since the concept of the bucket list became popular, everyone I know has made them, imagined them, or, at least, discussed them. I am no different. Us
View on Facebook
· Share

Ever since the concept of the bucket list became popular, everyone I know has made them, imagined them, or, at least, discussed them. I am no different.Usually bucket lists include places one wants to visit (Machu Pichu on the full moon) or experiences one would like to have (sky diving while wearing a clown suit). Again, I am no different. ... See MoreSee Less

Ever since the concept of the bucket list became popular, everyone I know has made them, imagined them, or, at least, discussed them. I am no different. Us
View on Facebook
· Share