A delightful surprise: a blog in my inbox that has an image of one of my sculptures
Periodically, one of you readers will ask about my previous life as a sculptor.  Since I stopped sculpting in the 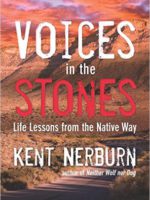 Voices in the Stones -- my new book and a thoughtful review from a good man
David Crumm, who quietly serves as one of the true allies of people laboring in the fields of spiritual and
A DAY JUST LIKE TODAY — Thoughts on the Dakota Access Pipeline
Recently I was flying across the country on one of those rare cloudless days when you can watch the full
OUR CHILDREN, OUR FUTURE
OUR CHILDREN, OUR FUTURE A wise woman named Robyn Sand Anderson just posted this in the blog comments as a
We need to move forward. Here are my first thoughts.
Listen to me. This is important. Trump won. We don’t know how; we don’t know why. Somewhere inside we thought
Why your responses sometimes are not getting through
You would not believe the garbage that gets dumped into the "comments" section of a blog. There are messages in
Would you support a kickstarter to republish A Haunting Reverence?
I'm thinking of doing a kickstarter to republish one of my favorite books, A Haunting Reverence.  It would be retitled
Two upcoming events: September 23rd and October 1st.
I am usually pretty derelict about posting my public appearances.  So here is some advance notice of two events. PDF.
Thoughts on the pipeline after Obama's injunction
Regarding the injunction against the pipeline, I don’t wish to throw cold water on what is obviously a great (though
The Pipeline protests
I have been watching the pipeline protests with dismay.  Can there be a more stark example of the conflict between
Thoughts worth pondering
Someone recently sent me this blog entry I had written about 1o years ago.  I had forgotten it completely.  But
Some personal thoughts on the passing of Dave Bald Eagle
There are people you meet in life -- and they are not many -- who have an air of true
Audio of Letters to My Son — a wonderful moment
Now here's one of the true joys of the writing life, and one of my proudest quiet moments. The audio
Another review of the film of Neither Wolf nor Dog. . .
I just received this in my in-box. Being compared to Easy Rider is no small compliment. I think this little
Early Alert: A showing of the film of Neither Wolf nor Dog
We are still ironing out the details, but I have made arrangements with the South Dakota Festival of the Book
At long last, the film of Neither Wolf nor Dog
Not much to say here, except to reprint my facebook post: The film of Neither Wolf nor Dog premiered to
Vote tally and a little Primer on Titles.
Well, folks, here it is:  45 votes for "Echoes of Forgotten Voices" and 75 votes for "Whispers of Forgotten Voices."
"Echoes of Forgotten Voices" or "Whispers of Forgotten Voices" -- the contest
The polls close at midnight on the voting between "Echoes of Forgotten Voices" and "Whispers of Forgotten Voices" as the
A little help needed. . .
Over the years many of you have asked, "What ever happened to A Haunting Reverence?  It was my favorite book
The editorial no newspaper would publish
As the Washington Post puts out its utterly bizarre, incomprehensible, and shamelessly self serving poll saying that 9 out of
« Previous 1 2 3 4 5 6 … 18 Next »