Despite hanging chads and repeated attempts to install an alternate slate of electors, neither side was able to eke out a clear-cut victory.  The 400 or so votes were split almost exactly down the middle between “the slight smile” photo and “the pensive reflection” photo.  So the issue had to be sent off to be adjudicated by the Supreme Court, which is me.

The decision was not an easy one.  Your comments not only mirrored my own thinking, they amplified and clarified my personal ambivalence because they deepened my own understanding of the limitations and virtues of each image.

In the end your collective thinking can be reduced to this: 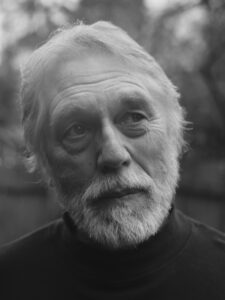 This photo has a worthy seriousness that “the slight smile” image lacks.  Perhaps there is a bit too much world weariness in it, but perhaps that world weariness is just a compassionate response to the realities of life. It is a photo of reflection and stillness, both physically and emotionally, and speaks of a resolved, if slightly melancholy, understanding of the world in which we live.  It has a greater gravitas than the slight smile image. 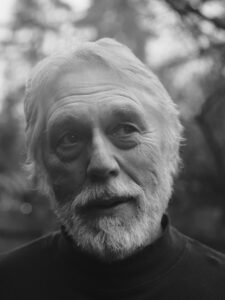 This photo has an animation about it — a slight twinkle that could be seen as an openness to the richness of the human drama, but might also be seen as a slightly ironic smirk.  It is approachable, more outward-looking and more nuanced than the other, but is less resolved emotionally. It speaks of someone whose thinking is in process and is still involved in observation, whereas the other reveals a person who has come to rest around a way of understanding the world.  It has more acceptance and less worry.

In the end, I decided to go with the photo with the slight smile.  There is still some sadness in it, depending on how you look at it, but it has a benign compassion that I like.  And, quite simply, it has a sense of humor. As someone said, it almost has the look of someone withholding a joke.

Truly, if I were doing another book of reflections or meditations I would choose the other photo.  In many ways I actually like it better. But the “slight smile” photo is more complex and shows more presence to the world.  And Lone Dog Road is a book about the world.

I cannot thank you enough for your thoughts and insights.  I never expected a response like the one I got.  I wish I could gather you all in a room so you could meet each other.  I would bet that each of you would find someone with whom you could easily become close friends.

Lacking that, all I can do is express my heartfelt appreciation for your continued interest and concern. We may be a bunch of lone dogs, but at least we’re walking our road together.