Amid all the political news filling the airwaves and print pages, a tragic and little known story has been unfolding in northern Canada. In a small Native town far outside of our cultural consciousness, over 100 people out of a population of 2000 have attempted suicide in the last few months. The oldest was 71, the youngest, 11.

You can read about it here, as well as elsewhere: http://www.theguardian.com/world/2016/apr/11/canada-first-nation-suicide-attempts-attawapiskat

As you know, I’ve spent the better part of the last three decades writing about the unseen reality — both the gifts and the tragedy — of the Native experience all across this continent. So this story hits very close to home, and I want to do what I can to open your hearts and minds to the reality that lies behind this barely-noticed string of tragic occurrences.

After many years of looking at the apparent disjunction between the putative wisdom of the Native peoples (which is very real) and the social and cultural dysfunction of the contemporary Native reality (which is also very real), I came to the hard realization that we are looking at full-blown cultural PTSD, born of the boarding and residential school experiences.

I try to tell this story in one of my quieter books, The Wolf at Twilight 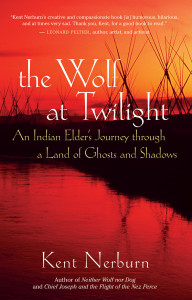 which has been overshadowed in many ways by its siblings on either side, Neither Wolf nor Dog and The Girl who Sang to the Buffalo.

But with this spate of suicides, I want raise this book up and encourage you to read it. All three of the books in the trilogy make reference to the tragedy of the boarding and residential schools, but The Wolf at Twilight tells the story straight on. Please go to Amazon and read a few pages of it. I think you will see that it is an enjoyable read, though the story it uncovers is difficult to hear.

But the fact is, we need to hear that story. Imagine your child being taken from you, denied the right to speak his or her own language, made to accept a strange religion and way of life, and told that everything you had taught him or her was a lie and from the devil. Imagine your child coming home and not knowing you; imagine looking in his or her eyes and seeing a stranger. Then imagine that child growing up, having children, and passing along this spiritual emptiness and all the anger and hopelessness that had been bred into the bone by this heartless social experiment.

These people trying to commit suicide are the children, and the children of the children who lived this nightmare. They can’t be who they used to be and they don’t want to be who they are told to be. And the world ignores them or celebrates them as The Washington Redskins with leering grins and big bulbous noses.

I am not much for self promotion, and promoting one of my own books is not comfortable. But, as a Native woman wrote to me a few years ago, “We entrusted you with our stories. You need to stop thinking of your books as your own. You just got to write them. They are our books. You need to use your white man’s status to get our stories known.”

I stand accused, and the writer was right. But if I can open a few eyes by asking you to read The Wolf at Twilight and to pass the story on, perhaps, together, we can move our societies a little further along the road of healing.

So I’m asking you to help me tell the story by learning the story and passing it on. Somewhere in the future, some little girl of 11, or an elder of 71, either in the north of Canada or on the city streets and on the reservations in America, might put down that bottle of pills or that rope or that gun because someone from the outside looked at them and said, “You exist, and your story matters.”

Perhaps that someone will be you or your children. We are all in this together.