As we slouch toward another election, full of anger and vitriol, I encourage any of you to look at the goings on in the Adirondacks Park, an amazing and administratively confusing combination of forest reserve, wilderness, and private land all protected by the New York State constitution. 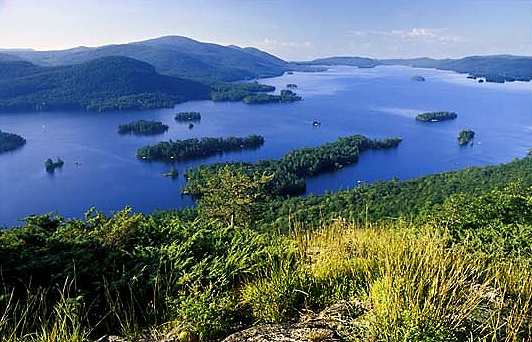 My wife, Louise, and I have just returned from a conference there, and I can say, without hesitation, that the way the environmental issues are being framed there is far beyond anything I have seen here in America for a long time. Without going into too much detail, the park has been designed as an administrative entity that draws what is called “the blue line” around a geographic area larger than Massachusetts. Within it are small towns ranging from the poverty-stricken to the upscale, vast tracks of forests, and hundreds of beautiful, cabin-rimmed lakes. It is quite unlike any other park entity of this scale in that it is not gated, it has no admission fees, and towns exist within its boundaries.

Such a park is destined to have all the issues of small town America: wealthy second-home buyers driving up the price of real estate without contributing meaningfully to the civic culture of the area; economically depressed communities that see economic growth as paramount, thus willingly embracing the Wal-Martification of the area if it will bring jobs for residents; the exodus of young people who do not wish to stay in a place where there are no meaningful jobs; “silent sport” enthusiasts opposed to and by heavy footed recreationalists who wish to see toys such as jet skis, ATV’s, etc., given free reign in the park; and on and on.

Though the political atmosphere there is as poisonous as any you will find anywhere, what is fascinating is that simple existence of a regional planning and zoning entity — the Adirondack Park Agency — raises the nature, if not the quality, of the discourse to a very unusual level. With this oversight organization as the whipping boy and lightning rod for this large geographical area, folks are forced to think on a regional as well as a local level. Thus, larger issues, like environmental degradation, intrusion of foreign plant species, corridors for wildlife migration, become part of the local political discourse, and whether you consider them real or illusory, central or peripheral, visionary or overly obstructionist, you cannot ignore them.

It was, for me, an enlightening experience to see a regional planning entity with teeth, not because of what it does or does not do, but because of how it puts larger issues on the table. For most of us, our political stepladder goes from community to state to national. There are local subsets, like school boards and park districts, but, by and large, our concerns are circumscribed by the administrative jurisdictions of those particular categories. A lot of fistfights take place over issues of autonomy — is the state or the nation usurping local authority, or raining down unfunded mandates that the jurisdiction below must then undertake? But the conceptual map for the average citizen remains this three-step progression from local to state to national.

In the Adirondacks, one of the most beautiful and civil places I have seen in this country, the issue of regional responsibility is on the table. The hidden realities of watersheds, animal migration patterns, integrated roadway systems, and the health of ecological zones are brought to the fore. That there is disagreement is no surprise; that there is anger that moves to the edge of violence is no surprise — try pushing regionalism here in the northwest corner of Minnesota or in the panhandle of Idaho. But the discussions are taking place.

So much of individual and cultural growth comes from the re-framing of the issues and the establishment of new paradigms of understanding. And change is never quick or easy. But it has to happen; no person or culture can remain a static entity. If we do not adapt to change, circumstances will force us to do so.

Right now on a national level our administration has become obsessed, rightly or wrongly, with the need to change our paradigm of thinking about national security. It isn’t easy, and it isn’t going well. I, personally, wish they would become obsessed with changing our paradigm about thinking about the ecological health of our planet. Had Al Gore had the courage of his convictions back during his run for the presidency, perhaps it would have happened. But he did not, and it did not.

In the Adirondacks, the paradigm of environmental health of an area has become central to the political discourse. Hearts are hardened, trigger fingers are itchy, and names are being called on both sides. But they’re being called for the right reasons and on the right issues. They’re not arguing about the arrangement of the deck chairs on the Titanic, they’re arguing about the course of the Titanic itself.

There is a lesson there for all of us. Democracy works, but only if the correct issues are before the people. In the Adirondacks they’ve got the right issues out there. In too many of our state, local, and national races, we are fighting about the wrong things, while the rough beast slouches and the future of our children is getting placed in increasing jeopardy.

P.S. After posting this blog, I received a response from the Adirondack Almanack blogsite, gently taking me to task for what the writer felt were some over-simplifications and misinterpretations. I am happy to be corrected and I encourage any of you readers who wish to get a look at the resident and footsoldier’s view of the Adirondacks to check out the blog at http://adirondackalmanack.blogspot.com/. It will take you deeper than my cursory visit ever could.

And to the Adirondack Almanack folks, thanks for writing. And please know that I do not in any way minimize the conservative, “dug-in heels” political posture and presence in the area. My point was, and is, that the way the issue is framed has a long term effect on the shape of the discourse, however bullet-headed and reactionary some of the participants may be. Trust me, I know. I live in a comparable area that has no “blue line”. Here folks fight over which hole in the ground to throw our motor oil in, not whether or not throwing motor oil in the ground is a constitutionally protected act. Cheers.